To elf or not to elf…. Since Elf on the Shelf was first introduced in 2005, I will admit I have had a slight love-hate relationship with him.

Now that my children are teenagers and our elf Candy Cane lives a simpler life perched on our Christmas tree, I can appreciate all the smiles that he brought in our lives for several years and how parents should approach the decision whether to welcome an Elf on the Shelf into your Christmas traditions. 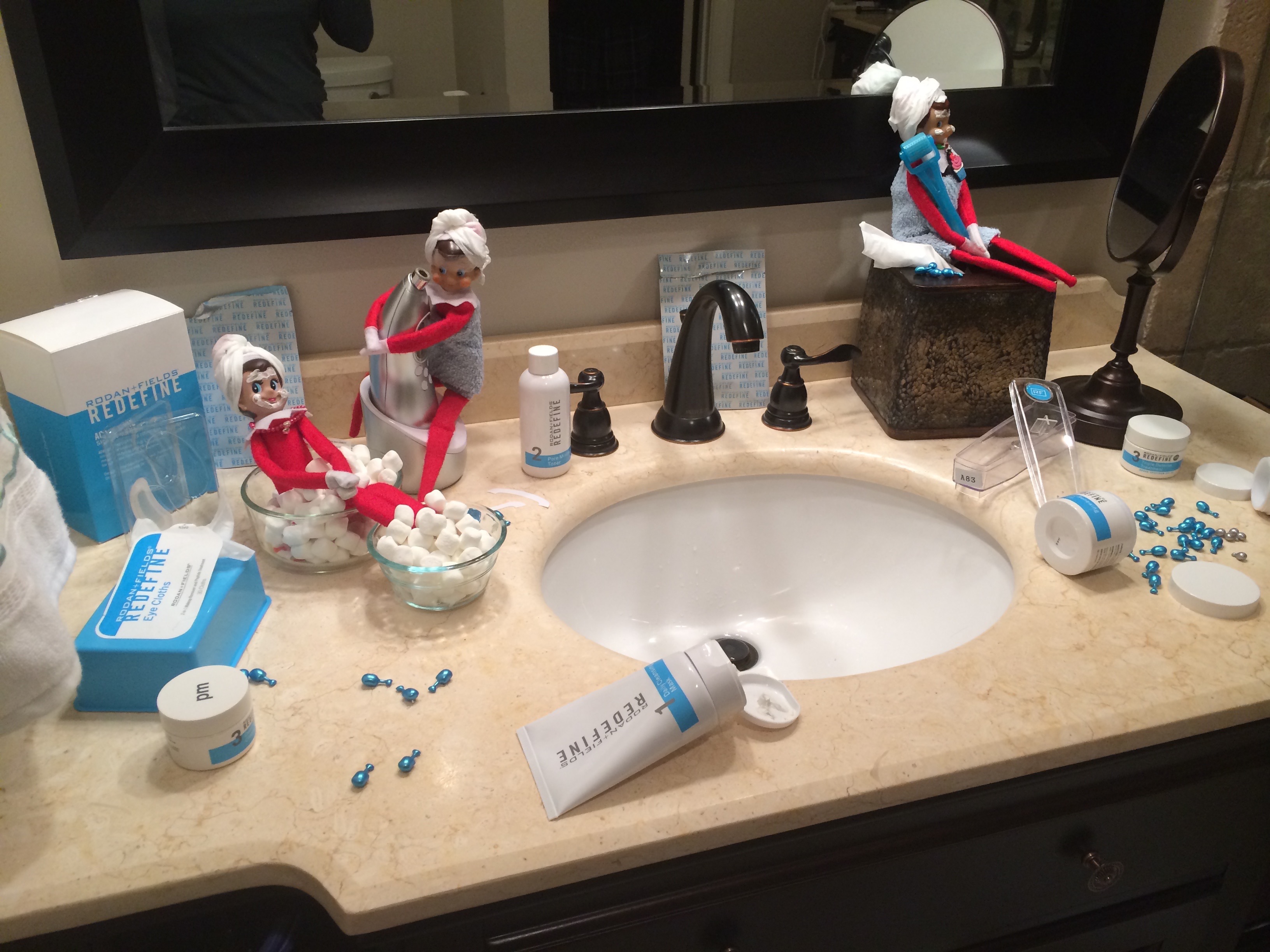 Candy Cane and his friends playing with my skin care while we slept.

In our house, Candy Cane always first appeared on Thanksgiving and came bearing his first gift. He also wrote a letter to the kids about what he’d witness happened to them over the past 12 months, which prompted them to write back.

When the time came, Candy Cane would leave a note when he left our home on New Year’s Day each year and we would wait to see him again in 11 months.

The adventures and traditions grew the longer Candy Cane was visiting us.  A reindeer friend named Pokey came to live with us and then the reindeer brought another bigger reindeer friend named Bernard.  Eventually, when my son was experiencing a stage of being afraid to go to sleep alone in his room, Nutcracker Peter showed up to “save the nights” and be a protective soldier on guard.  Peter showed up with 5 miniature nutcracker soldiers who brought a guardian angel too. Oh my!  It wasn’t long after Candy Cane and the reindeers moved into an old dollhouse the kids painted red and green with fake snow on the roof, that I realized this ELFcapade had developed into an exhausting ELFtravagaza and maybe I should have listened to some advice from some seasoned parents. 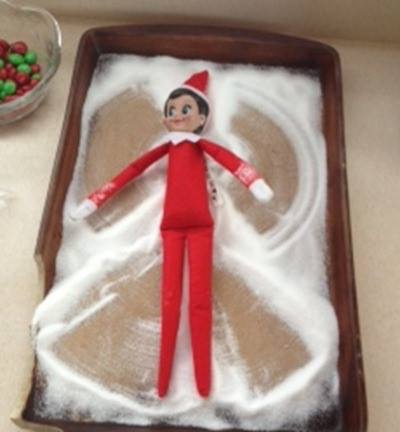 Here are a couple tips to consider if you’re a novice:
1. Keep it simple: The antics of Candy Cane moving around the house every night could initiate stress for my husband and me if our memory didn’t engage before bedtime causing us to bolt out of bed in a panic at 2 a.m., 5 a.m. or even 5 minutes before they got up, realizing we didn’t move the elf.
2. Start as you mean to go on: When you start a tradition, make sure you think long-term how this will play out as your kids get older. All the letter-writing, gifts, and Candy Cane adventures were fun, but it was an extra expense and time each night that we didn’t take into account when Candy Cane first arrived and we kept trying to outdo adventures night after night.

For us, the benefits far exceeded the investment.  Candy Cane and his crew were utilized to teach lessons, instill values, and foster dreams with our children. They became a confidant to our children and a way for them to express their curiosity and desires.  All of which was ultimately incredibly priceless.

Would love for you to share your favorite Elfcapades too!

The Elf on the Shelf is a great tradition that I look fondly on. Our son and daughter would get so excited to see him. It was really engaging for them and interactive, as they woke up each morning looking for the elf and reindeers and writing the elf an occasional letter. My advice is to definitely have an Elf on the Shelf, but make sure it is a simple and long-term relationship you want to foster for years to come. 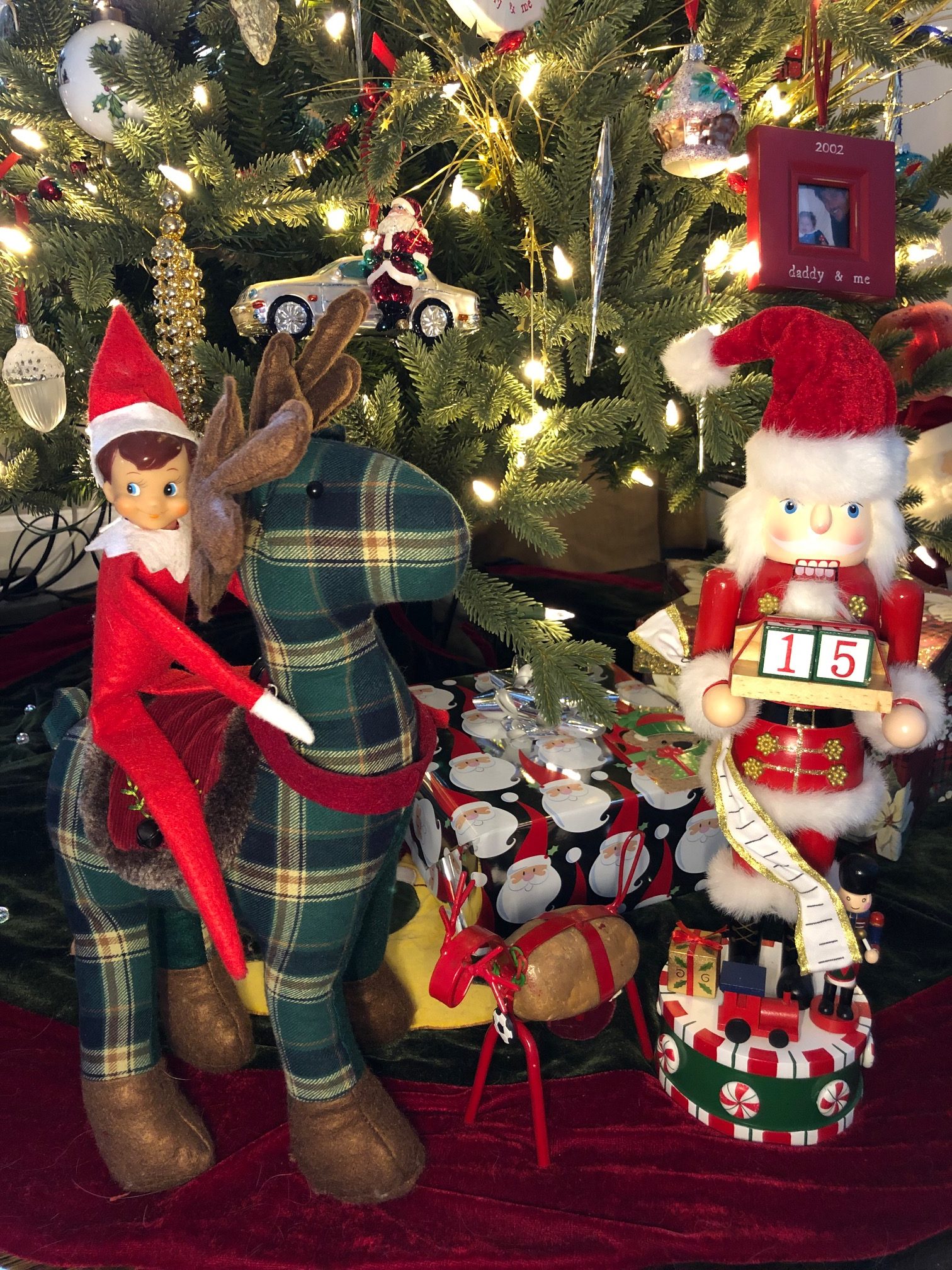 A elf family photo: Candy Cane and the rest of his family.

🎉🎉 ReNEW Year Special on 3 of our top sellin

Prayer makes your heart bigger, until it is capabl

Happiness is a choice .... do you resolve to stay

Happy Birthday to this Guy! 🥳 He's our rock, o

This error message is only visible to WordPress admins